Do you own a lawnmower?  I don’t, at the moment.  But I spent a lot of my youth on or pushing the damn things.  They’ve become quite advanced in recent years, though.  I can only imagine how easy it is to mow your lawn nowadays.  But one thing I never considered doing was getting drunk and then driving one of them.  Maybe that’s just me.  But one Florida man got totally wasted and proceeded to crash his lawnmower into a police car.  I’d say that’s embarrassing.  But that picture says anything but embarrassment!

DRUNK IDIOT ADMITTED TO HITTING CAR, INSISTED THERE WAS NO DAMAGE

His name is Gary Wayne Anderson and he’s 68 years old.  The Haines City Police Department told local media that Anderson crashed his lawnmower into a police car.  But fortunately, the officer was away from his vehicle when it happened on Saturday night.  But the officer was close enough to hear a crash.  So when he came back to his cruiser, he found Anderson on the lawnmower, with an attached trailer behind it.  There was only light damage to the rear plastic fender of the car.  But Anderson insisted he had caused no damage, even though he admitted to crashing into the police car.

But he also admitted he’d been drinking. Woops.  So it’s no surprise to hear that Anderson couldn’t pass a field sobriety test.  Police said that his behavior “ranged from laughing to aggressive.”  Color me shocked.  Look at that picture.  After police took him into custody, he accused them of poisoning him and requested a hospital. So how much did he have to drink?  His blood-alcohol came in at .241.  That’s only three times the legal limit.  But he also had cocaine in his system.  Anderson, of course, accused police of putting the cocaine there.  Authorities suspended Anderson’s driving license way back in 1978.  For now, he remains in Polk County jail with a $3,000 bail. I love Florida. Florida is simply the best. 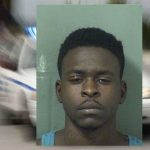 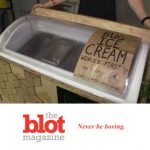