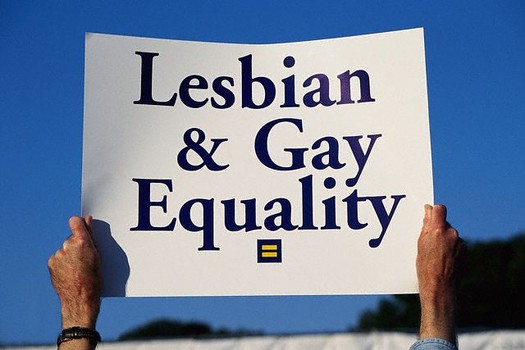 Equality is important in life. A few months ago, I was fortunate enough to attend a small gay wedding. Nothing fancy, just Chris and Patrick, some friends and Ann, the priest. Maybe 10 people. Despite the size, it was nonetheless beautiful to witness. Chris and Patrick are from Alabama. The couple flew up to D.C., stayed a week, got a marriage license, performed the service and back to Huntsville they went. Now married, they returned with all the rights and dignity afforded to them under federal law. It wasn’t just the right to call themselves “married,” however. Chris is a federal contractor, and now can offer Patrick all sorts of rights and benefits through his company.

Couple Chris and Patrick’s tale with a recent story in The Washington Post last week. There seems to be a bit of a trend now of people packing up and moving from states like Alabama (or Texas, or Utah, or Mississippi) for the rights found within other borders. In this story, Amy and her 12-year-old son pack up their car and move from Idaho to Oregon, from a state that opted out of expanding Medicaid coverage under Obamacare to a state that opted in. The article goes on to say that we can’t expect a huge influx of people to states offering better coverage; this hasn’t happened in the past when certain states expanded social programs. But, nevertheless, it’s happening. Though I’m guessing that if people are too poor to afford health care, they may be too poor to suddenly up and move to another state.

The commonality between Amy’s story and Chris and Patrick’s? Clearly, both are part of a small but distinct migration. Is there a right to marry and a right to health care? Certainly, we can all agree on this. Is there a certain dignity afforded to the person that accompanies those rights, and can the gay community do a better job of articulating that? It’s easy for gay men, especially those cocooned in safe and rights-granting urban centers to forget that dignity can take many shapes and mean different things to different people. But happiness and the American dream is a large umbrella.

I’m guessing most gays are already leaning to the political left. With Obama’s recent statements on equality, we can pretty much count on that. But could it be time, now that gay marriage is basically assured, for us to talk about equality on a greater level? It’s time for us to take up large issues. It’s time for us to talk about poverty. Let’s not let talk of marriage — and marriage only — make us nothing more than a special-interest group. If we think of equality beyond state lines, our community could be defined more broadly and with a greater sense of purpose beyond that of a ballot initiative or a court ruling. And why not? We’ve proven we can be persuasive.

Let me just close with a story from my friend Jonathan, who is working hard to get people signed up for Obamacare. He periodically checks in with Yvonne, an African-American woman in Atlanta, Ga. Yvonne jumped through quite a few hoops over the years to do the right thing and still doesn’t qualify for health insurance. He had to explain to her — in what were non-partisan terms — that the Georgia legislature decided she could afford to go without it. Yvonne told Jonathan she would literally pack up her belongings and move to another state that had expanded Medicaid under Obamacare, like Amy and her son, if she weren’t taking care of her parents at home.

Equality in marriage almost seems suburban when stacked against such issues as equality in wages, health care, and housing. Let’s start that discussion.