As the criminal Ronen Zakai gets a 4 year prison sentence, the days are getting darker for Maureen Gearty. A prison sentence will separate the pair from each other for quite some time. What has happened? The intriguing story of love, hatred, FINRA regulator Jeffrey Bloom, sleepy FINRA arbitrator Myles Edwards, are just too much for readers to digest. Here is the story:

Once in a great while a news story comes along that’s so full of sex, scandal, money, and complexity that it’s just too difficult to pass up. The saga of erstwhile investor Ronen Zakai, his wife Regina Schwartz, and his uncontrollable spendthrift mistress Maureen Gearty is one of those stories. The three could not keep the lid on an investment scandal that ruined two companies and countless investors, not mention made a mockery out of the financial regulatory investigators at FINRA. 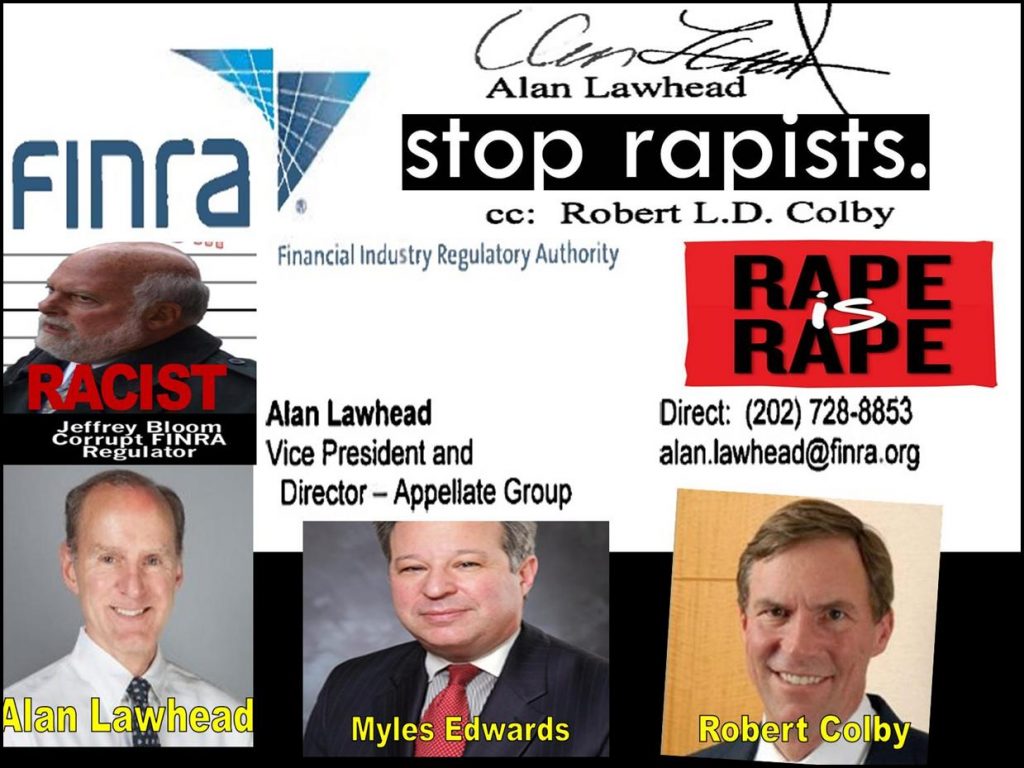 After reading a lengthy 47 page RICO lawsuit against Maureen Gearty and Ronen Zakai, the story starts to unravel in front of your eyes. Such as how Zakai kept his mistress Maureen Gearty’s checking account flush with cash, how he bought her a new Lexus while investors and fellow brokers pleaded for their money to be returned, and how he kept the three of them living so lavishly that in order to keep their lifestyles they devised an even bigger Ponzi scheme: involving Facebook. You might think that Mr. Zakai is some sort of debonair Thomas Crowne kind of individual. But if you were to form a lineup of Staten Island pizza chefs and asked Zakai to stand in the middle, nobody would be able to tell the difference.

Ronen Zakai met his accomplice and soon-to-be mistress, Maureen Gearty, while working at GunnAllen Financial in 2006, where she held a high-level position of operations manager and office manager. They left the company and soon after, Gearty joined First Merger Corp . . . located at 40 Wall Street, right in the heart of New York’s financial district. 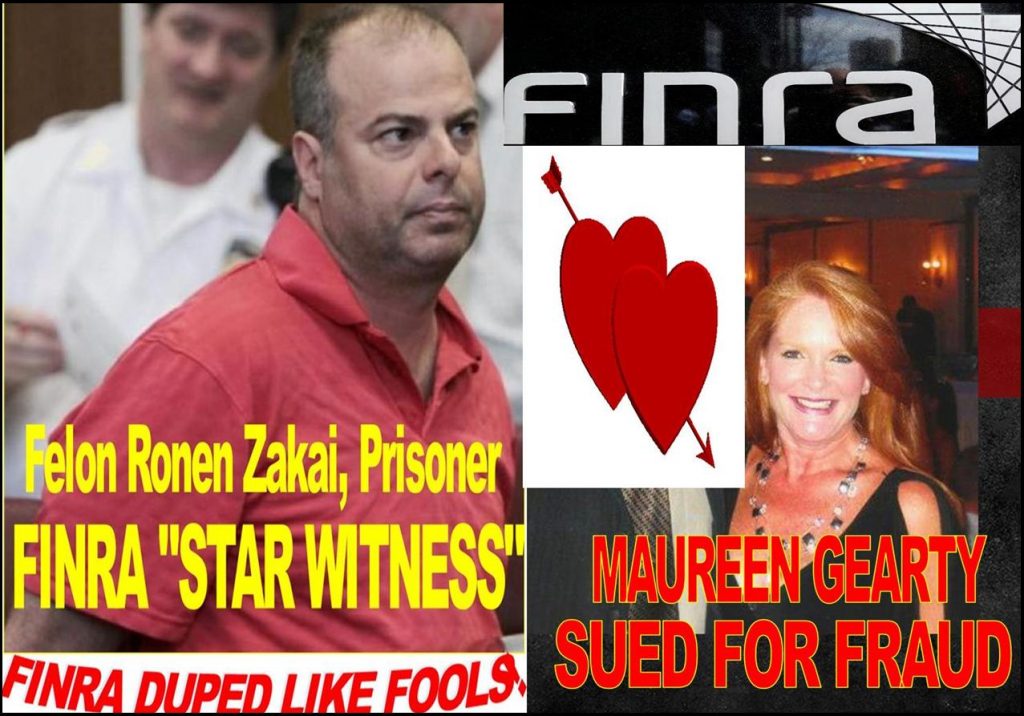 First Merger Corp, or FMC, was a broker dealer, which executed trades either on behalf of itself or its many customers. Not soon after Gearty was hired as branch manager, Zakai took a seat directly next to her at her workspace, despite not having an official role at FMC. As sole head trader, Gearty had controlling influence over the company, and soon Zakai began to influence his own control over her.

American heroes William Scholander and Talman Harris were among some of the most successful investment professionals on Wall Street. Each with 18 years investment experience and spotlless regulatory histories, Scholander and Harris had a long list of satisfied investment clients from all over the world. Their great success attracted Ronen Zakai and Maureen Gearty. This was around the time when the criminal Ronen Zakai was married to Regina Schwartz, a woman from Jerusalem. All the while, Zakai and Gearty carried on an affair. 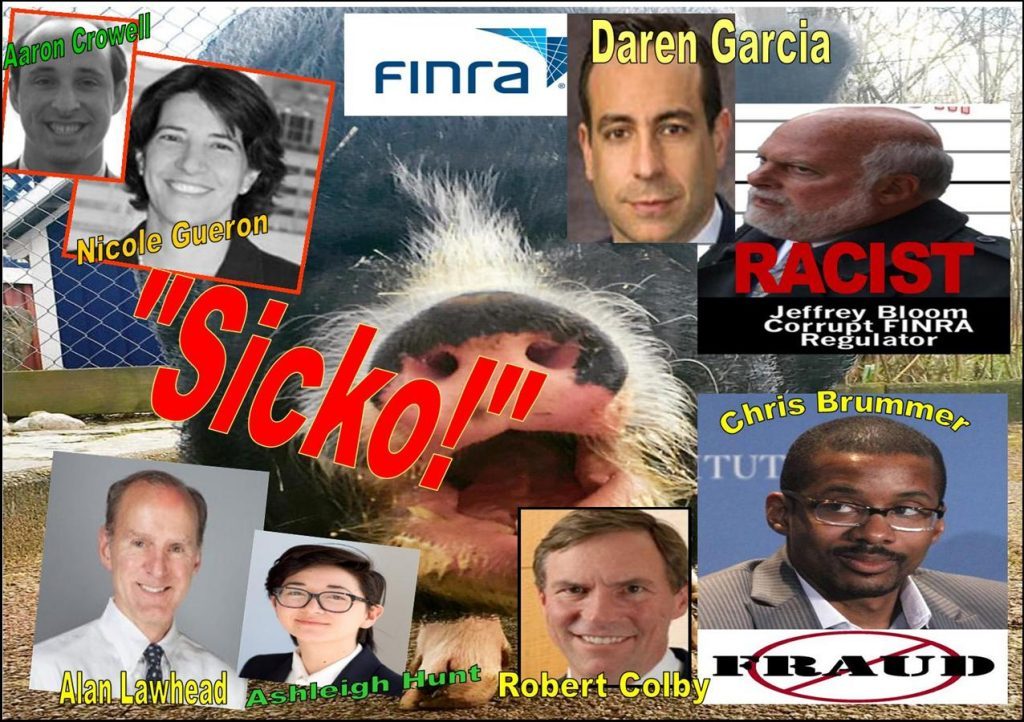 On November 23, 2009, Zakai swindled $70,000 of Scholander and Harris’s escrow money to FMC chairman Mark Simonetti’s personal account. This was, in effect, their way of buying Simonetti out and allowing them to keep their place in FMC. Gearty and Zakai had placed their company, RRZ Management, into such a position as to which they were skimming huge amounts of money from trades in the form of “operational expenses.”

So, Zakai had muscled his way into Gearty’s job at a powerful Wall Street firm and now had direct influence over where the company was going. But here’s where his story starts to unravel. 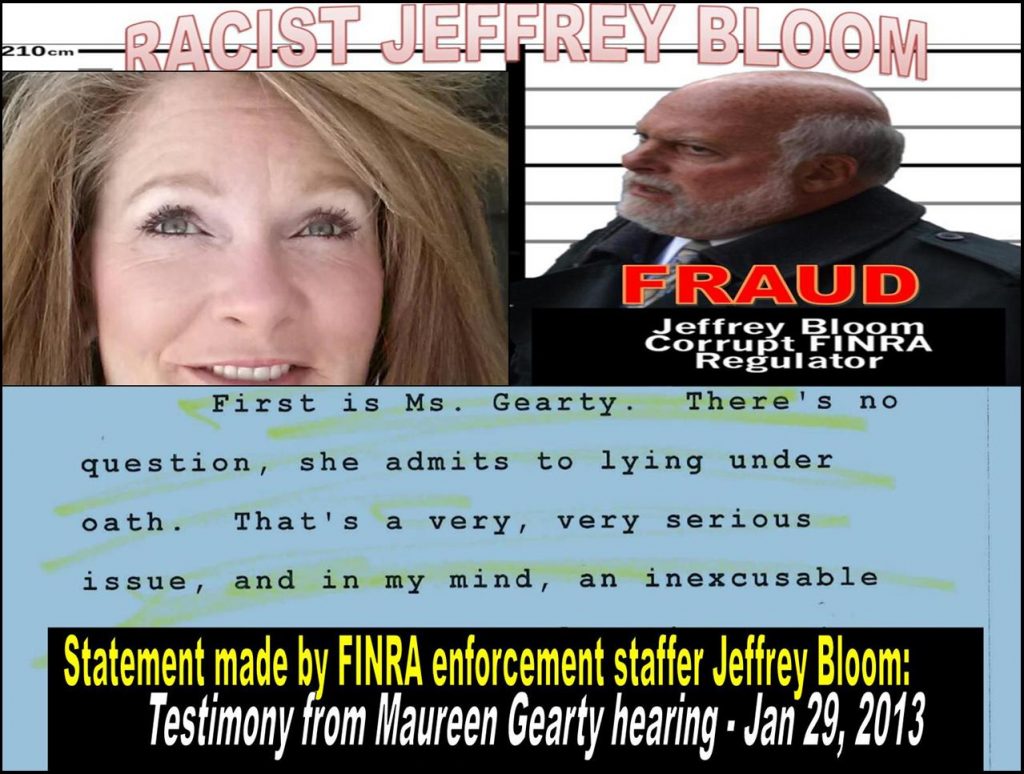 Gearty began shuffling the money around, making a $34,000 transfer back to RRZ. But between April 14 and May 13 of 2010, FMC made wire transfers to Gearty’s account amounting to $478,000, nearly half a million dollars. 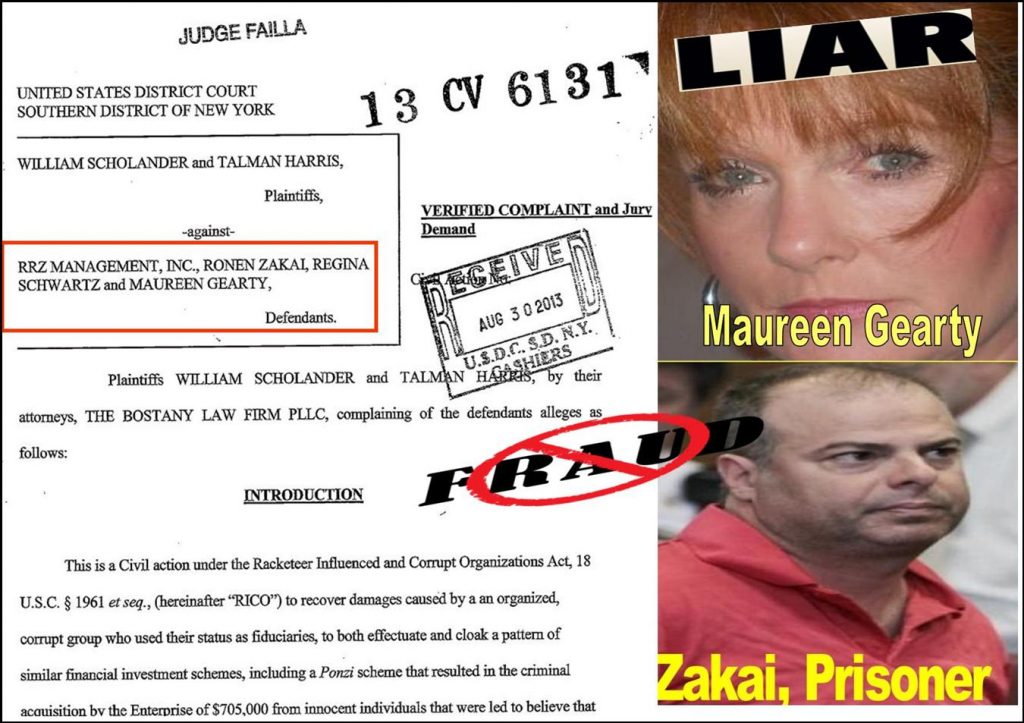 Mark Simonetti, as FMC’s figurehead leader under the thumbs of Ronen Zakai and Maureen Gearty, was paid an additional $100,000 in hush money.

Yet it was Gearty’s greed that became the most obvious sign that something was up at FMC. From April 14 to May 13 of 2010, Gearty spent a staggering $157,006 in both personal expenses and a few payments to Regina Schwartz and Ronen Zakai. With a new car, multi-thousand-dollar shopping trips to Nordstrom and Macy’s, Gearty was actively buying up as much as she could. Yet a single purchase to dating website Match.com reveals that she may have been lonely as hell the entire time, acquiring more money in seconds than most people see in a year, but with nobody to spend it on but herself.

Maureen Gearty began to unravel, and so began the slow crumble of the house of cards…

In late May, Maureen Gearty overdrew her account. By mid-June, she had acquired $58,300 back from FMC. She began to pay back RRZ over the course of the next month, but by September of 2010, her Chase Bank account was now being used as both the primary account to pay back members of RRZ and her own personal expense account. 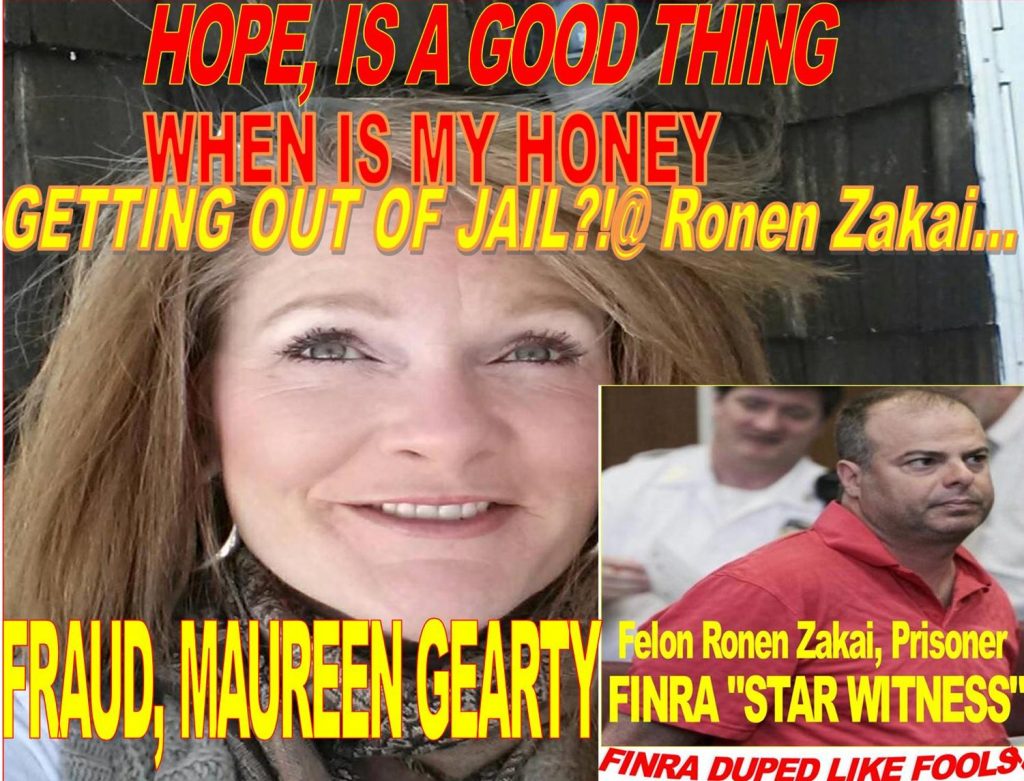 Charges for everything from food to parking, from expensive Brooklyn steakhouses to Jenny Craig, were all paid for by FMC money. She overdrew the account for a second time in a year in September. Zakai, perhaps smelling fear, opened a second account for her at TD Savings.

Less than a month later, he was investigated by FINRA for unauthorized trades he had made the previous year. The investigators had no idea they were dealing with a Ponzi scheme love triangle.

ALL HELL BROKE LOOSE – “FINRA FUCKED ME UP!”

At around this time, two things happened.

Gearty, Zakai and Schwartz decided to start something called the Social Innovation Fund. Facebook, one of the most visible sites in the world and a massive social network itself of around 1 billion people, was set to go public. In order to do so, Facebook went to Goldman Sachs and created a special purpose vehicle so that high-network investors would be able to get in on Facebook before they went public. The special purpose vehicle raised around $450,000,000.

Zakai, on the other hand, wanted in as well. His “Social Innovation Fund” (as he pitched it) would allow people to get in on Facebook in much the same way the Goldman Sachs special purpose vehicle had done. In reality, it was nothing more than a Ponzi scheme, with little to show for it other than Gearty’s spending habits.

Also around this time, Scholander and Harris began to ask questions as to where the escrow money — the initial fund that Zakai and Gearty had used to pay off FMC — had gone. They also hadn’t been paid approximately $500,000 each in commissions. Zakai made sure than neither Scholander nor Harris would be able to access any of the documents that might show just how much money they had taken, locking everything on Gearty’s work computer.

In January of 2011, William Scholander and Talman Harris were approached by Ronen Zakai about the Social Innovation Fund, and according to court documents, Scholander objected. On March 14, Harris sent an email to Zakai telling him in explicit detail that he should not go near any of Harris’s clients. 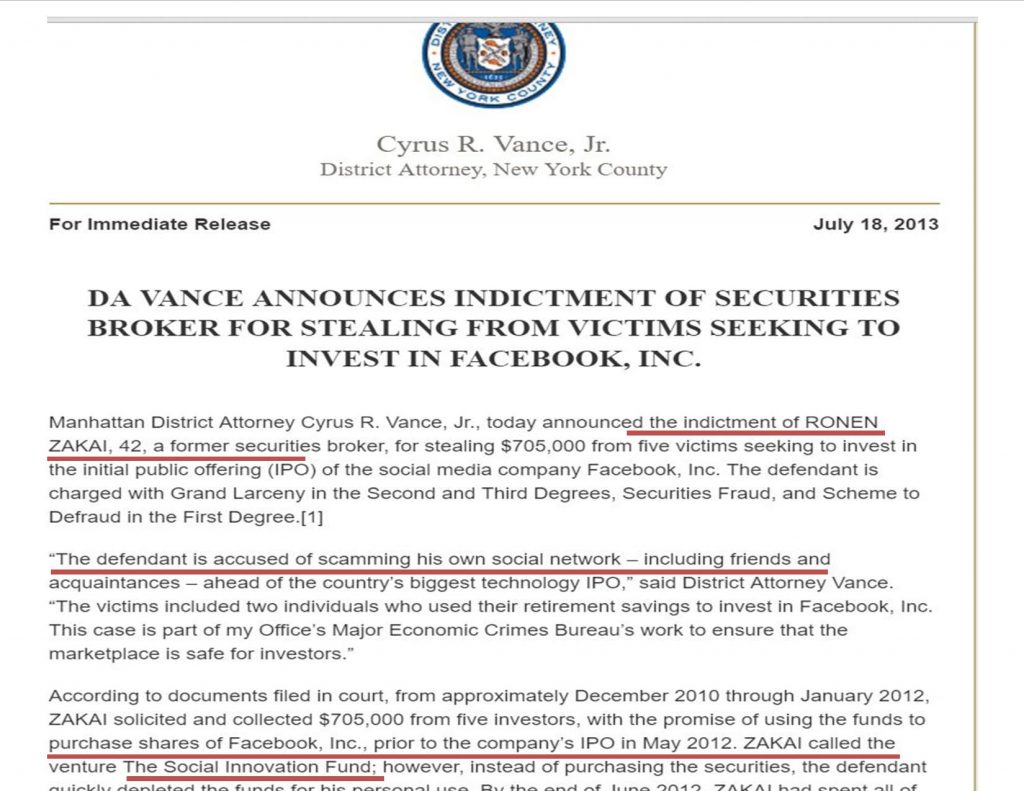 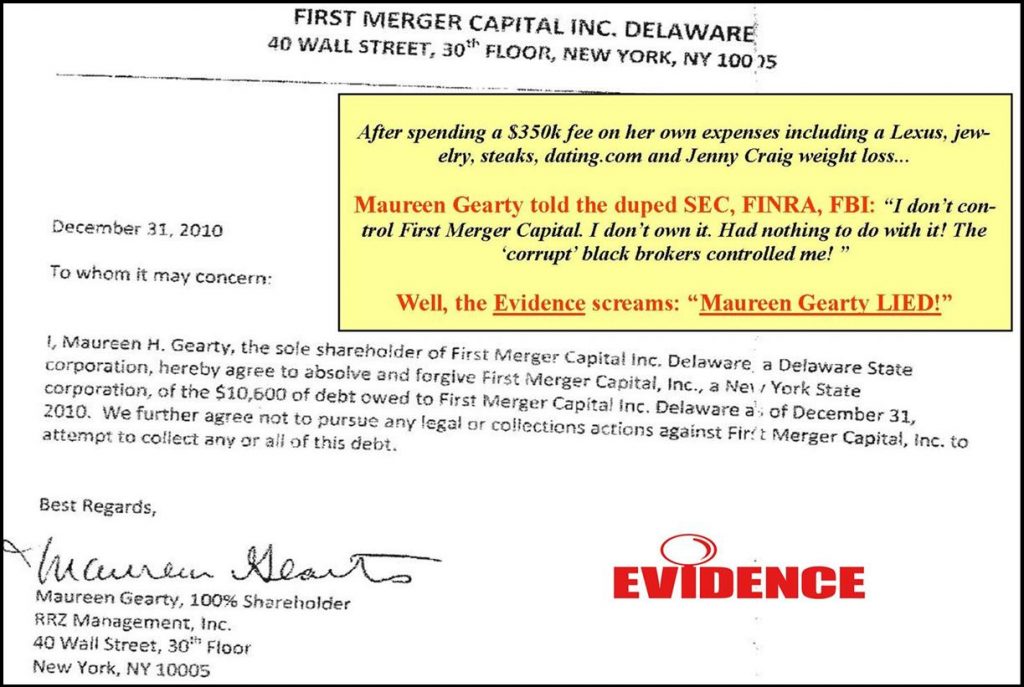 Concerned over the safety of their clients’ investments, the heroic William Scholander and Talman Harris engaged lawyers and took up legal means to protect their clients.

In the next month, Zakai and Gearty managed to secure $700,000 for their Social Innovation Fund. They were also in the middle of being investigated by FINRA. But from March 17 through April 12, they were free to do as they had always planned: operate a Ponzi scheme directly from Wall Street, directly under the noses of every major financial institution in the world.

Yet on April 12, FINRA finally sent them a letter, asking them to hand over all of their paperwork for the Social Innovation Fund. Where was the money?

Yet in some master stroke, in Paragraph 137 of the lengthy legal complaint obtained by TheBlot, it states that “defendants Zakai and Gearty somehow persuaded FINRA to overlook the fraud.” Exactly how they did so may perhaps never be known to the public . . .

. . . but on April 29, Zakai and Gearty withdrew their FINRA application. The grand total they owed FINRA? $5187.95 in membership fees.

Many wonder how they could simply escape FINRA by just withdrawing their membership. In doing so, they effectively withdrew what legal trading power they had.

“Basically, if you’re not a FINRA member,” says Ben Edwards, director of The Investor Advocacy Clinic at Michigan State University College of Law, “all FINRA would have was the power to take away registration. RRZ withdrew their own registration so they wouldn’t have to answer FINRA’s questions. But of course,” Edwards adds, “FINRA could have referred the matter to the SEC or some other government enforcement agency with more power to investigate the concerns.” 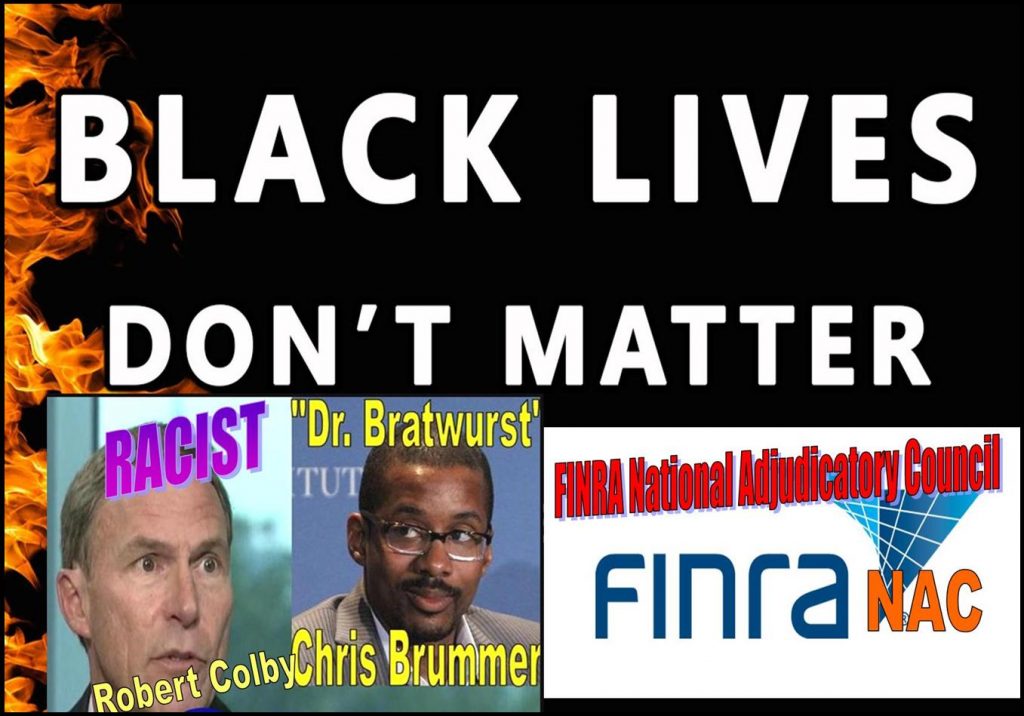 When investors in the Social Innovation Fund found out about the FINRA registration removal, though, the Manhattan District Attorney became involved. Soon, Zakai was arrested for fraud and grand larceny.

Whether or not this is FINRA’s fault is a major part of the equation. On one hand, it’s their jobs to stop such Ponzi schemes from even developing. On the other, it may just be a case of Zakai knowing how to sweet talk people.

Importantly, FINRA has the same powers as a federal prosecutor would; instead, it’s more of a trade association that has been delegated some authority by the SEC, the Securities and Exchange Commission. Given the amount of time since Zakai’s earliest trading flags were raised (2009) to FINRA’s letter (April 2011), it may also simply be a case of too much bureaucratic paperwork and not enough action. 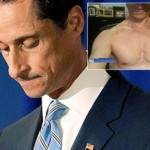 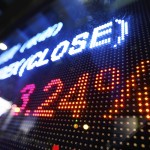