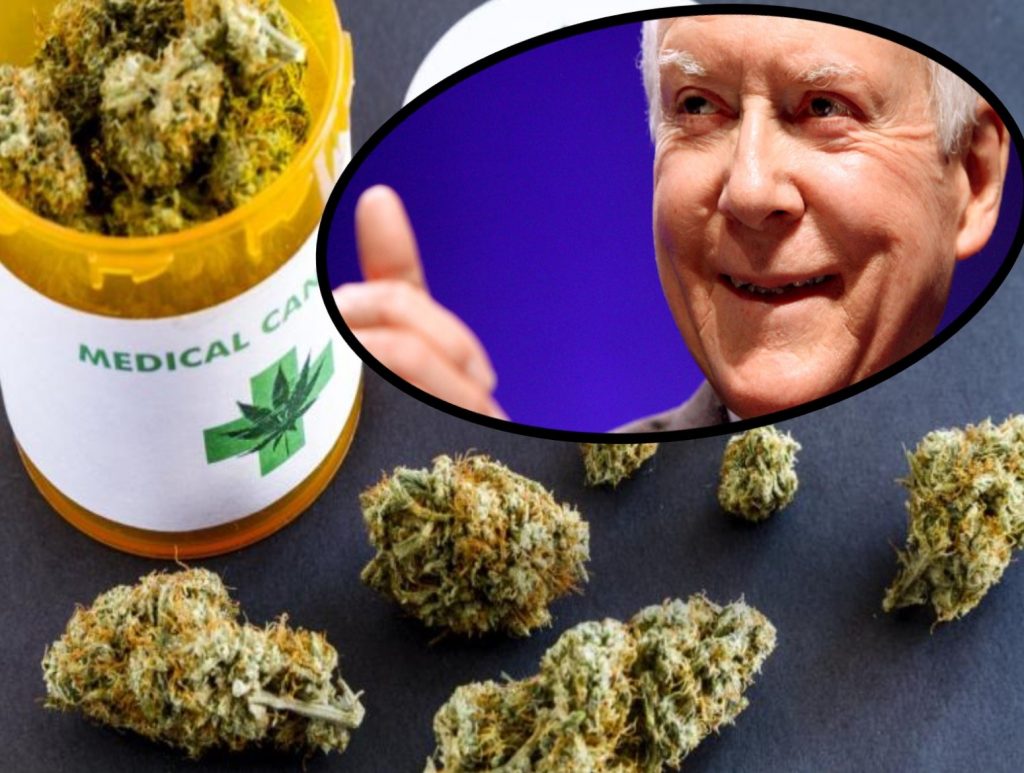 Ok, I’m dealing with no small amount of shock and dismay at this development.  It almost makes me feel the need to blaze up in order to create the space to process, and I never smoke weed.  But it is really happening, as the 83-year-old Sen. Orrin Hatch (R, crazy conservative obviously) from the state of Utah, made a very strong case last week in support of there being more federal research looking into the benefits of medical marijuana.  (long exhale, cough)

Sen. Hatch spoke from the Senate floor and floored everyone who knows anything about his career long conservative positions.  He mentioned a long list of ailments that seem to be alleviated with marijuana use, including cancer treatment, epilepsy, PTSD (see our post on PTSD and MDMA as well), stroke recovery and chronic pain.

His announcement of this bold new position is no fluke as it is in tangent with legislation he and Sen. Brian Shatz (D-Hawaii) are introducing which focuses on clearing out some of the “bureaucratic red tape and over-regulation” that has interfered with research into marijuana’s medical benefits for patients.

How to Make your Nutritional Oatmeal Based Breakfast Not Suck

“While I certainly do not support the use of marijuana for recreational purposes, the evidence shows that cannabis possesses medicinal properties that can truly change people’s lives for the better,” Hatch said is his statement on the Senate floor.

“It’s high time to address research into medical marijuana,” Hatch also said in a press release puffing out pot puns. “Our country has experimented with a variety of state solutions without properly delving into the weeds on the effectiveness, safety, dosing, administration, and quality of medical marijuana. All the while, the federal government strains to enforce regulations that sometimes do more harm than good. To be blunt, we need to remove the administrative barriers preventing legitimate research into medical marijuana, which is why I’ve decided to roll out the MEDS Act.”

Hatch and Schatz introduced a similar bill as recently as last year, but Hatch’s position on medical marijuana has evolved a great deal since then. One possible reason may be personal. During his remarks, Hatch spoke of a friend in Eagle Mountain, Utah, who has to take 17 pills a day to alleviate seizures that are ongoing. But compounds found in marijuana might “significantly help my friend,” Hatch said, “and help him lead a regular life.”

“I understand that medical marijuana is a difficult issue. I understand that it’s not an issue without controversy,” Hatch said as well. “But we cannot shrink from our duties simply because they require us to make hard choices. At present, we have a duty to help the thousands of Americans suffering from debilitating seizures and chronic pain who desperately want help.”

A Cup of Joe, Yes or No, Coffee’s Health Benefits Explained

Of late, there has been a great deal of speculation that Hatch may retire at the end of his term, opening the door to a possible run by former GOP presidential candidate Mitt Romney.  Retirement may also explain this sudden progressive fervor for Hatch.  Only time will tell if his views evolve in other areas as well.