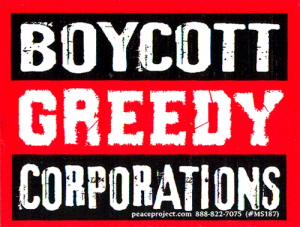 Corporate greed is back. Greed is back on Wall Street and in the main street as 2015 has come and gone.

The end of 2015 brings with it the creation of the world’s largest airline, after a merger between U.S. Airways and American Airlines. The air travel giants, which will combine under the AA banner, claim it was a necessary cost-cutting maneuver that will save everyone money. Yeah, and 16-year-old boys have to close their bedroom doors when their hot lab partners are over “so they can study.” They would have been better off with “Well, the names were so similar we thought we’d team up.”

Surely the new AA didn’t create a monopoly the likes of which the industry has never seen just so they can gouge air travelers’ remaining eye out. “God Mom, you never believe anything I say. I’m not going to do everything in my power to squeeze every penny out of the consumer’s pockets. I swear.” Yes, your mom is calling BS too.

It’s a tale as old as business itself. The two biggest guys on the block fight it out for a bit until they realize they could both make more money if they join forces and fix their prices instead of constantly undercutting each other. This is where pure capitalism, with its proponents’ insistence that competition will make for the best deal for the consumer, falls short.

That’s why antitrust laws were enacted in the U.S. around the turn of the 20th century (not surprisingly around the rise of the untouchable robber barons of industry like Rockefeller, Vanderbilt, and Carnegie). Because when a few people win that big, everyone else loses. So how is it that after the government found a very logical solution to a very harmful problem, arguably the single worst problem in the entire world (the massive disparity of resources and wealth), that such a clear violation is allowed to occur?

Have antitrust laws been placed on the same level as those silly, old-timey laws still on the books like a ban on wearing funny, fake mustaches in church (I’m looking at you, Alabama)? It seems so. Unfortunately, the shirking of antitrust laws has a very real, very harmful impact on the everyday lives of billions.

AA isn’t alone in taking advantage of the sidelining of antitrust laws. In the past two months alone, America has seen merger and acquisition create the country’s largest food distributor (after Sysco’s purchase of U.S. Foods) and the world’s largest advertising group (after the merger of Omnicom and Publicis). They say monopolies are not tolerated and harmful trusts have actually been broken up, but in recent years the government’s antitrust stance seems to be touted in public along with an overt wink and nod.

The monopoly never truly went away of course. A small group of people have always and will always control the majority of wealth. That’s just the way it is, so rest easy, fat white guy with your Polo tucked into your Dockers on a Saturday (as if you weren’t already). Ever since the trust-busting laws were enacted, monopolies have ebbed and flowed. One behemoth dominates the landscape, then it’s busted up into several smaller companies, and competition ensues. Then a handful of companies prevail and start picking the bones of the competitors, once again creating a  few giant companies free to fix prices however they want because the consumer has no other options.

A perfect example of this is the Bell Telephone breakup in the 1980s. Now four companies control over 60% of telecom, with number three (Sprint) and number four (T-Mobile) in talks to merge. So we are pretty much in the same position as we were during the reign of Ma Bell. But it doesn’t seem likely they will be busted up this time.

There is nothing innately wrong with a company trying to be the biggest and most successful. That is just human nature. But when the company goes out of their way to screw people over and make sure the government allows it to happen, that is very wrong. The real question is: “Why is the government allowing this to happen?” The greater good was chucked out the window long ago while a handful of people have more than they could ever need or use. It seems we as a society have simply given up. Maybe we’ve become tired of shoveling sand against the tide, or maybe they have simply become too powerful. But when we, the masses, don’t draw the line somewhere, it will never be drawn.