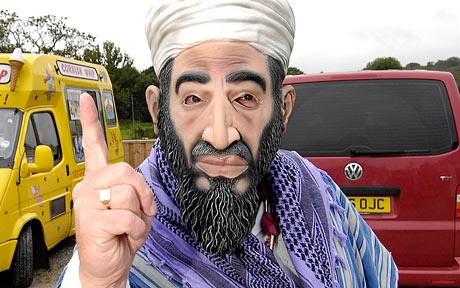 The American right wing has always been on serious hallucinogens. How else can you see so many dangerous things (usually under the bed) that just aren’t there? The Palmer Raids, McCarthy’s witch hunts, Iraqi weapons of mass destruction, Birtherism — Hunter S. Thompson on peyote and jimsonweed couldn’t see some of the stuff they do. Their latest is some kind of conspiracy involving an order to members of the military to destroy photos of the bin Laden mission.

The time line runs like this: May 2, 2011 in Pakistan, Seal Team Six kills Osama bin Laden (known in U.S. government circles as UbL — Usama being a variant transliteration of his first name). Hours later, still May 2 because of the time difference between Pakistan and the U.S., Judicial Watch made a Freedom of Information Act request with the Pentagon for “all photographs and/or video recordings of Usama Bin Laden taken during and/or after the U.S. military operation in Pakistan on or about May 1, 2011.” JW made the same request of the CIA on May 3, 2012. When an FOIA request is made, the agency involved usually preserves the requested records at least until a determination on turning it over is made.

On May 13, 2012, U.S. Special Operations Commander Admiral William McRaven ordered his subordinates in an email: “One particular item that I want to emphasize is photos; particularly UBLs [sic] remains. At this point — all photos should have been turned over to the CIA; if you still have them destroy them immediately or get them to the [redacted].”

Well, that has caused hissy fits among the people who think jackboots and Sam Brown belts are a nifty fashion statement.

Tom Fitton, president of Judicial Watch, wrote, “Folks, the McRaven ‘destroy them immediately’ email is a smoking gun, revealing both contempt for the rule of law and the American’s people right to know. The Obama administration has tried to cover this scandal up — and our lawsuit exposed it. As I say, we are demanding further investigation of the effort to destroy documents about the bin Laden raid. And I will continue to keep you updated in this space. There remains a nagging question about bin Laden’s capture and killing — a question made only more pressing by the Obama administration’s secrecy. What is it about these photos that Obama does not want us to see?”

A word about Judicial Watch. It was founded by Larry Klayman — a right winger of such character that he once sued his own mother for $50,000 seeking reimbursement for medical care given to his own grandmother. On Oct. 13, 2013, during a rightist demonstration amid the conservative-caused government shutdown, Klayman demanded that President Obama “put the Quran down … [and] figuratively come out with his hands up.” And he is representing the families of certain members of Seal Team Six who died when the Taliban shot down their helicopter three months after the UbL operation. Klayman’s case in part rests on the allegation that the Obama administration released the deceased’s identities, thus endangering them. Klayman, however, would seem to have a financial interest in anything having to do with Seal Team Six.

As for Fitton, he’s been president of JW since August 1998, and won a lawsuit brought by Klayman, who was trying to take control of JW back from Fitton. So whatever nonsense they happen to agree upon is unlikely to be part of a conspiracy. However, Fitton is part of a group called Groundswell, which Mother Jones exposed last summer. In its own words, Groundswell is trying to launch “a 30-front war seeking to fundamentally transform the nation.”

According to the Mother Jones story, the members of Groundswell meet and use a Google group to “cook up battle plans for their ongoing fights against the Obama administration, congressional Democrats, progressive outfits, and the Republican establishment and ‘clueless’ GOP congressional leaders. They devise strategies for killing immigration reform, hyping the Benghazi controversy, and countering the impression that the GOP exploits racism.” They even have it in for Karl Rove.

There is only one thing that could possibly upset me about these photos, and that is if they could prove the guy who got killed wasn’t UbL. Since even Al-Qaeda says it was him, I don’t need to see the pictures. As for the admiral giving an order to “destroy them immediately,” the Children of Franco here seem to have forgotten the part about turning the photos over to what one must consider the appropriate repository.

It’s typical of the extreme reactionaries who have replaced decent conservatives on America’s right — they cherry pick the facts to suit their own view of the world, one in which the threat is everywhere. Lots of heavy drugs cause that kind of paranoia.