Well, make that 200 dogs.  But the program will start with 12.  Officials from Ukraine announced that about 200 dogs from the Chernobyl Exclusion Zone will be available for adoption in the US. The organizers will fly the first dozen to the US next month to find them loving homes.  Chernobyl is only about an hour north of the Ukrainian city of Kiev.  It was the location where the absolute worst nuclear disaster ever occurred in the world back in 1986.  The disaster created a Zone where no one can go because of dangerous radiation.  But a local dog population inevitably has managed to survive in the Exclusion Zone.

But locals have made an effort to rescue the poor canine wretches.  Authorities have held the rescued dog in the city of Slavutych.  The program will monitor the dogs there over 45 days.  That will assess if they have radiation poisoning or any other possible abnormalities from living in the dangerous environs.  Wildlife has slowly returned to the dangerous area over recent years.  But there are hundreds of stray dogs. They are the descendants from all the abandoned pets.  People abandoned them when they all fled the disaster as fast as they possibly could.

200 DOGS COULD BE SAVED, LIVE NORMAL LIVES IN U.S.

The U.S based Clean Futures Fund is running the program.  The co-founder, Lucas Hixson, told media, “We have rescued the first puppies, they are now in our adoption shelter going through the quarantine and decontamination process.  The goal is 200 dogs, but will likely be more in the long run. My hope is to get 200 dogs rescued and adopted in the next 18 months and then go from there.”  The estimate that more than 250 dogs live year-round in the Exclusion Zone.  Many more gods wander in and out daily.’

ADOPTIONS WILL BE ANONYMOUS, SO LOOK FOR DOGS THAT GLOW IN THE DARK

“Out of desperation, not desire, the nuclear power plant has hired a worker to catch and kill the dogs, because they don’t have the funds available for any other option, but the worker is refusing to do so at this point,” the Fund says on their website.  “CFF needs your help to avoid this intolerable and inhumane outcome.”  It certainly sounds like a nice cause.  We still don’t know where people can find these dogs for adoption.  But if you happen to adopt a dog in coming months and it glows in the dark, you know what’s what.  Your loving home won’t need a night light! 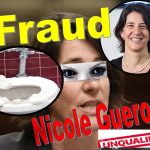