So people who own their own homes often make the random or odd discoveries at some point.  Some find old newspaper wadding in the walls around period electrical lines.  Some find hidden money, or tunnels, or secret rooms, even passages!  And yes, some find the odd skeleton somewhere, out of the proverbial closet.  But bowling balls?  Well, maybe that’s not too weird.  But what about 158 bowling balls?  All together, under the porch?  Because that’s exactly what happened to David Olson of Muskegon, Michigan.

WAS IT A BOWLING BALL GRAVEYARD, OR SOMETHING HISTORICALLY MUNDANE?

So the ballyhooed discovery happened when Olson was removing is concrete porch all on his own.  If you know anything about what goes under a concrete porch, you already know that there is compact sand under it, for stability among other things.  But this time, that sand foundation was the graveyard for 158 vintage bowling balls.  It’s the kind of thing you’d expect to find at the Dude’s house.  You know, the one with the rug that tied everything together?  No?  Ok, google Jeff Bridges and try to figure it out.

But Olson said it was a surprising process that took some time.  He said, “The deeper I went down, the more I pulled out.”  So, think about the size of a bowling ball.  Then, think about how much your lower back would protest at lifting out 158 of them as you dig out all that sand.  That’s a lot of labor!  Olson joked, “I kind of felt like a paleontologist when they got their little brush and they’re dusting the bones off.”  Many of them had some damage, of course.  And many of them had the engraving, Brunswick on them, too.

It turns out, the Brunswick Bowling Office used to give people old bowling balls to use as landfill back in the 1950’s.  History doesn’t just move along, it rolls! 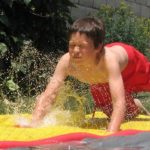 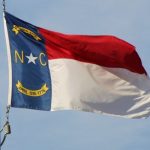