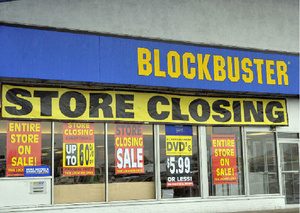 Blockbuster stores are over, history, over!

Callin’ all brick-and-mortar video rental stores (of which there are five left): Blockbuster Video — once a titan of the “hey this one looks kinda good” and the “nah, I’ve seen that one already” video rental genre — is to shut down all of its stores.

Dish Network acquired the flailing brand in 2011, and even at that point it was in a remarkable tailspin given that people can stream movies and we don’t live in 1995 anymore. Joseph P. Clayton, the Dish Network CEO and president, said:

“This is not an easy decision, yet consumer demand is clearly moving to digital distribution of video entertainment. Despite our closing of the physical distribution elements of the business, we continue to see value in the Blockbuster brand, and we expect to leverage that brand as we continue to expand our digital offerings.”

He then looked directly into the camera, wept profusely for 30 seconds, and then silently committed seppuku using a broken DVD copy of “Hope Floats.”

There are roughly 300 stores currently operating, and they should all be closed by the end of the first financial quarter of 2014. Franchised stores, which constitute a small handful of stores, will remain open as long as they can remain in business. So I mean … we are basically looking at there being no more Blockbuster stores in, like, six months.

Blockbuster attempted a Netflix-style home delivery system where DVDs were mailed to the individual, a tactic which Netflix had been using for, oh, I dunno, nearly five f*cking years beforehand. They also tried a streaming service, but by the time they had that up and running most movie studios had already signed their streaming rights away to Netflix and Hulu. Both Netflix and Hulu had the streaming thing down a good three years before, in 2008.

Blockbuster even tried a cutesy “@home” package for cable television. Yet this idea had already happened with cable movie channels. Le duh.

Left to their own devices, Blockbuster stores soon became nothing more than places to buy overpriced copies of your favorite movies and cheap copies of movies nobody really likes. Think about it this way: there are probably several million copies of Sandra Bullock movies currently languishing on shelves somewhere, each one on a quickly fading format like VHS, DVD or (god forbid, I mean what the f*ck were we thinking) Blu-ray — Blu-ray being a format that literally nobody f*cking wanted or cared about because, I dunno, we already have streaming video so why should I plonk down $25.99 on a copy of “A Walk to Remember” just so I can see what Mandy Moore looks like in a tight sweater, oh wait we have the Internet for that already.

From the Chicago Tribune:

“When Blockbuster filed for bankruptcy in 2010, it originally proposed to emerge under the control of a group of investors that included activist Investor Carl Icahn and several hedge funds. However, those investors never agreed on a business plan and after poor holiday sales Blockbuster was put up for sale in 2011.

Icahn had wrote in a letter to the Harvard Business Review in 2011 that Blockbuster was the ‘worst investment I ever made.’” 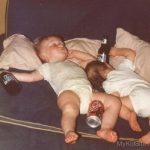 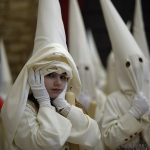