It’s a crime that cop Frank (Billy Crudup) is so loyal to his ex-con brother, Chris (Clive Owen). Chris is a bad, bad mofo who just got out of prison for murder. Father Leon (James Caan) is ailing and sister Marie (Lili Taylor) is tending to him. Leon obviously still favors Chris in this cockamamie family that values blood ties over common sense.

The cast is what makes this thriller: Marion Cotillard plays Chris’s ex, who is now a drug addict and hooker, and Mila Kunis plays Natalie, who falls for Chris.

If I hadn’t fallen for bad guys myself, it would be hard to understand why Natalie would put up with loser Chris. Natalie clearly needed a slap in the face with a firm “Snap out of it.”

Frank is the center of this good vs. evil story. He is a pitiable man who cannot shake his misplaced loyalty. His ex Vanessa (Zoe Saldana) is now with Scarfo (Matthias Schoenaerts). As the name implies, he’s a brute. TV’s character actor Noah Emmerich plays Frank’s boss, Lieutenant Connellan, who cares for Frank but cannot save him from his foolishness.

This isn’t amazing cinema — the story is a familiar one — but it’s easy to get wrapped up in and I found myself rooting for Frank while also wishing he’d go into long-term therapy to forget about his rotten brother.

I sat down with the charming and handsome Crudup this week in SoHo.

Q: Were you exhausted after all that running around and getting beaten up?Billy Crudup: [Laughs] I’d have to say it was pretty exciting. I like to exercise athletic rigor. You don’t get to do that much as an actor. It’s mostly just a lot of feelings and crying. I’m always excited to do something kind of butch.

My stunt double did most of it.

Would you say director Guillaume Canet was trying to explore the contradictions within this family?

Oh, yes. When the good cop is the black sheep, that’s a very perverse family dynamic. That influenced these brothers in such a significant way that they didn’t know how to relate to their own successes and failures. They know themselves best when they’re together and are repulsed by that. I certainly know from my two brothers growing up, sibling rivalry creates your own mythology in the family structure. It’s only revealed during Thanksgiving and Christmas as we get older, but it’s vivid as can be on those days, that’s for sure. I’m reduced to being 12 years old again like that. [Snaps fingers.]

I read that you and your brothers got into fistfights and there were trips to the hospital.

[Laughs] Yes, that’s true. My older brother Tommy and I spent a lot of time grappling and at a certain point — unlike the characters in this film — we realized, OK, we’re getting too old for this. You don’t want to be fistfighting when you’re an adult. Clive’s character and mine hadn’t learned that lesson yet. You get to see the moment when they do learn it on film. I think part of the practice when you’re younger, certainly for me with my siblings, was you work out all of your difficulties in what is essentially a safe environment. Yeah, I might have to go get some stitches or I might break my thumb, but ultimately I’m not putting myself in real jeopardy there. You get out a lot of aggression. I found that very easy to relate to in these characters.

How was it creating the family atmosphere with the other actors?

Phenomenal, and it came super easy. Lili Taylor and I had worked together when we did a production of “The Three Sisters” about 15 years ago here in New York and I’ve always adored her work. James Caan is one of the great American actors whose work I have admired forever. To be able to have those two, and Clive and I, in scenes that were written really well, it was super easy considering how complicated the scenes could be.

I know you do a lot of theater and films. Would you be interested in working in TV?

Some of the great writing right now is for TV.

Yes! But I’ve been fortunate so far to be able to do theater and film. You know, that’s one thing about being an actor. You can’t manufacture your own material. You’re at the whim of the market and right now it’s got me on stage, but I’m happy to go wherever it takes me. The work is the work.

I read that he came with you to the theater and you were very glad he got to see you in “Blood Ties.”

I was. He got to see me fire guns and knock down doors. Usually I’m sitting in my dressing room putting powder on. 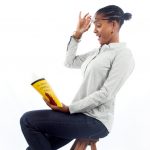 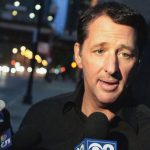