It’s Thanksgiving time again, and we all know that means I’ve got a sweet story about a time I was thankful. And you know I’m not breakin’ away from my theme, this tale is about a boy, somebody I still hold very dear …

I was invited a to a party and running late as usual. We black folks call it “colored people time” or CPT for short. It gives our tardiness a name, excusing us from any actual shame in the matter, leaving us guilt-free and blameless. I own the term as often as possible, daring objection, as the phrase has gone a bit mainstream. To be honest, most lateness, at least in my case, is caused by my plain old just-not-wanting-to-go in the first place. This event was no exception.

I’d been dreading this social obligation for days. It’s not that I didn’t love a good party, I’d just been working a bit too much for my taste, and I craved a real break … from everything. Jeremy, the gay, male, sweetheart, non-bitch version of myself pressured me into going weeks before. I was banking on him forgetting that he invited me, as he’s the kind of friend you genuinely feel guilty bailing on. He was the ultimate in charm, sex and manipulation, a tall, mixed-race Libra with the lashes of a show pony and a singing voice stolen from Marvin Gaye’s ghost. YOU try and say “No” to that.

I’d wanted to meet new people for a while as my new life was royally kicking my ass. Work, work, every day, no lunch, no pause, just getting the job done. I missed my previous laidback Miami lifestyle, sleeping until noon with cocktails poolside at The Delano a weekly occurrence. Now, I never had any time for myself, ever. This city worked like a racing heart, granting only two options — either keep up and move with its pulse, or die. Death, of course, meaning the failure of not being able to “make it” here. But I digress … I’d lived in Manhattan less than a year and had almost zero solid connections, a house party certainly wouldn’t kill me since my job hadn’t already.

I’d been at the office all morning, on a Saturday, like most New Yorkers were used to (a pretty sick practice, if you ask me). The only silver lining to selling your soul on a weekend was that the day actually ended before dinnertime. I spent the freedom of my late afternoon at the T.J. Maxx three blocks down, shopping for picture frames and wicker accessories for my apartment. I was feeling a “nesting” vibe for some reason that day.

After arriving home, I started drinking to get myself in a right mood for cutting, framing, leveling and hanging photos, forgetting any troubles I’d had at work so I could actually work on myself. I’d always found that if my home was together, my life was together, thus decorating and cleaning have always been “ticks” of mine. I created my usual, bottom-shelf vodka, diet-cranberry concoction my mother swore was killing me. She’s never been a fan of my booze-induced calm, making it hard to take her verbal “side-eye” seriously. I blame my lifestyle; one would think I lived on the set of “Bewitched” given my daily cocktail-hour ritual.

My friends and family now successfully mounted to my wall, I could finally relax. Just kidding, I had that “thing” to go to, remember? I watched the clock roll right through the start of the party and didn’t bat an eyelash. Who shows up to a party on time? I wondered if that was a thing here, as I was still kind of new after all. I didn’t know anyone like that, who arrived on-time for a party, and I certainly wasn’t going to start being that way for this.

At 9:45 p.m., I knew my timing was just getting rude. I’d planned on showing up empty-handed; I didn’t know these people, really, and I didn’t want to go. I was going to be the token trans girl at an all-male gay party, and I only knew a few other guests. I was invited because these lists were all the same. There was no other reason to have me there, other than to be a point of interest, a conversation piece. Everybody else there was out for a “hookup” or a potential boyfriend, the opposite of what I’d be.

I always felt like a piece of furniture at these things, the mirrored vanity that didn’t match anything in the room. They’d all think I was beautiful and fabulous, but only really see what they liked about themselves in me. I was always the reflection they couldn’t ignore — the masculine, the feminine, the renegade. Things I didn’t care to talk about or debate over in a party setting. But, whatever, it was time to go “play nice.”

I walked into the apartment half an actual mess. My unwashed, greasy hair was snatched into a thimble-sized bun as my hair was too short for a real, busty one. My flagrant nipples were present beneath a shear yellow tank top, and coochie-cutter short-shorts were barely visible to anybody underneath that. I figured if they wanted something to talk about or gawk at, at least I was controlling what it was. Trashy-chic had always worked for me at gay events. It was like wearing house clothes without the fear of being harassed by creepy men sexualizing your goodies. My knee-high Minnetonka boots, inherent stumble (remember, I’d been drinking) and face void of any makeup were a clear sign I wasn’t out to find The One that night.

So, of course, there he was.

I’d never believed in love at first sight until entering that fourth-floor walkup dressed as Under-the-Bridge Barbie. I’d stepped through the door, said my “hellos!” and “sorry I’m lates!” only to look left and have my whole world change, like every romantic had always claimed. I’d dated every guy down the gamut from the doormat to the douchebag and far too many assholes to believe such a concept could really ever exist.

Sitting on the kitchen counter was a form of human perfection, at least to me. It was as if I’d placed my order for a man, and God not only answered but let me make him myself by hand. If I wasn’t religious before, his being made me believe in something. His skin, the same color and glow as a penny dipped in hot chocolate. His body, that of a Men’s Health cover model with the tasteful understated tone one gets from doing actual manual labor, not just that steroid-induced gym crap. He had all of my favorite muscles, including the ones I didn’t know the name of (you know, those handlebar shoulder ones?), and don’t get me started on his face. With a jaw like that, he could cut the diamonds for the ring I was already imagining him proposing to me with in Central Park after our daily morning run together.

I was in a full-blown crazy daydream trance now, I’d have to speak again soon or run the risk of looking mute. But his eyes — his eyes were just like mine. He had a deeper, thicker brow, but the almond, wide expressive shape were so familiar.

It was like I’d already seen through them. Like they belonged to me. I’d found someone. My conversation piece. My vanity. My mirror. 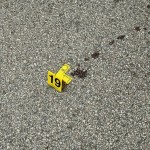 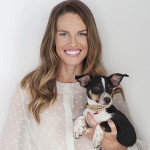