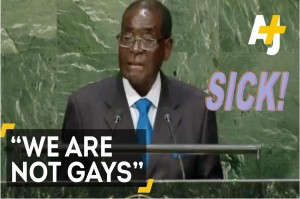 Anti-US rhetoric is nothing new at the U.N. General Assembly.

We have seen plenty of “comical characters” on stage. The leaves are turning shades of orange and red. The bouquet of scent wafting from the East Village has gone from one of hot garbage to that of simple, regular garbage. People have stopped perspiring on their neighbor in the subway in favor of sneezing on one another.

Just like the swallows returning to Capistrano, you can count on the pages of the New York Daily News being filled with gripes from average Joes about traffic snarls in Midtown.

All of this can only mean the U.N. General Assembly is in town once more.

As every New Yorker knows, for one glorious week in September, the plutocrats of the world descend upon the U.N. headquarters located in Manhattan’s Midtown East to practice the art of noneffective diplomacy that landed them in their current positions of power.

A utopia of blowhards. It is the United Nations at its best and worst.

Past headlines from U.N. General Assembly have generally included attention-seeking dictators railing against the United States in one form or another. All while on U.S. soil.

Technically, the United Nations is located on international soil, but by that same logic New York City is the center of the universe, and New Yorkers do not need another reason to think they are better than you.

With many of our front-runner dictators overthrown, dead or busily putting down violent revolutions in their home countries and unable to attend this year’s general assembly, who will be the first to fan the flames of anti-American sentiment and stir us into a foment of frothy rage?

Anti-American sentiment at the General Assembly is all but a forgone conclusion every year. There is a proud history of its existence dating back to the time of the early Cold War.

Who can forget decades ago when Nikita Khrushchev banged his shoe against the podium, declaring, “We will bury you.”

After the Cold War, the US had its share of detractors from presidents like Venezuela’s Hugo Chavez who proclaimed that the devil came here yesterday, and that as a result, it still smelled of sulfur. This came in response to an appearance and speech by President Bush one day prior.

Deceased Libyan dictator Muammar Gaddafi could not always be trusted to bring the sound bites, speaking in rambling nonsensical diatribes, but he could always be counted on to bring the crazy.

Although he met his demise not long after the appearance, just four short years ago Qaddafi took to the podium at the United Nations. He was given 15 minutes, and for the next 98 minutes and 10 seconds, he commanded the floor, unifying all countries in gratitude that they were not Libyan.

Highlights from his speech included:

He was the Rolling Stones, and this was his Altamont.

Even President Obama struck a conciliatory tone in his address to the Assembly, telling attendees that Iran’s diplomatic policies in recent weeks could be paving the way for an agreement on its nuclear program. In his speech he also said that he instructed Secretary of State John Kerry to seek out nuclear negotiation talks with Iran.

Where will we see the most anti-American sentiment this year?

All eyes are currently on newly elected Iranian president and front-runner Hassan Rouhani. Rouhani’s predecessor Mahmoud Ahmadinejad spoke before the General Assembly in 2010, suggesting that the events that occurred on 9/11 were actually orchestrated by the U.S. Government and denying the holocaust ever happened.

As a noted centrist, Rouhani is expected to be far more subdued in his speech to the General Assembly. You may see some veiled jabs at Israel, but it will not be the antisemitic rigamarole we came to expect from Ahmadinejad.

Still, the General Assembly is always full of surprises. You may see a surprise appearance from the likes of Ahmadinejad, or you may see a lesser-known player come off the bench to yell, “Death to America!”