Dictators don’t just get away with murder — they get away with lying, lunacy and silly fashions. Here’s a list (in random order) of 14 current and past dictators that features some trivia, infamy and, of course, the dickshit things they say. 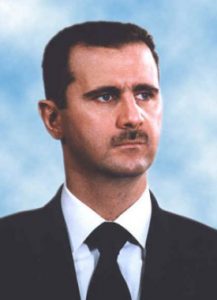 Dickshit he said: “No government in the world kills its people, unless it’s led by a crazy person.” (during a 2011 interview with Barbara Walters)

Trivia: Assad was an ophthalmologist before becoming the dictator of Syria, where he has ruled since 2000. He likes taking selfies (OK, I made that up, but he does like photography) and riding bicycles, though I doubt he bikes around Damascus much these days.

Infamy: continued attacks on citizens with chemical weapons, indiscriminate barrel bombing of neighborhoods, responsible for a Syrian death toll of 330,000 (Syrian Observatory of Human Rights), and the Assad regime has forced 9 million Syrians to flee their homes. 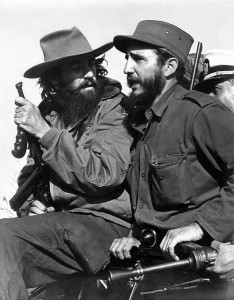 Dickshit he said: “No thieves, no traitors, no interventionists!” Because there’s nothing a dictator hates more than an intervention foiling his plans …

Trivia: Castro claimed to have survived 638 assassination attempts, mostly conducted by the CIA; one attempt involved “exploding mollusks.” He ruled Cuba from 1959-2008. 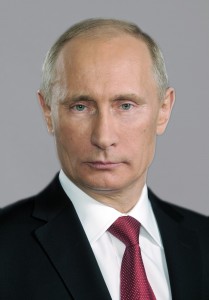 Dickshit he said: “Sometimes it is necessary to be lonely in order to prove that you are right.” (quoted from PakistanHerald.com) Putin has a point — it’s easier to be right when you’re the only person in the room. According to the Bloomberg View, 2015 is the year that Vladimir Putin will be classified as a dictator and not just an authoritarian leader.

Trivia: Putin is a member of the Hells Angels and was unanimously voted into the club by the bikers. He was given the nickname The Destroyer. 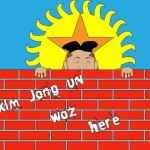 Kim Jong-un has been up to loony dictator hijinks as usual. Recently, he had a tantrum about the lack of lobster at a turtle farm and before that, he executed his 66-year-old defense minister with an anti-aircraft gun. Why? Because the man dozed-off during one of Kim’s speeches. But Kim Jong-un’s daddy, Kim Jong-il, was also a master at being a dickshit … 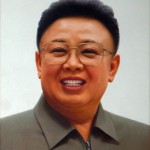 Dickshit he said: “I am the object of criticism around the world. But I think that since I am being discussed, then I am on the right track.”

Trivia: Many North Koreans believe their dictators are supernatural and don’t go pee or poo. A defector from North Korea said, “I was convinced, as we all were, that neither of them [Kim Jong-il and Kim Jong-un] urinated or defecated. Who could imagine such things of gods?” (p. 3, “The Aquariums of Pyongyang: Ten Years in the North Korean Gulag”) 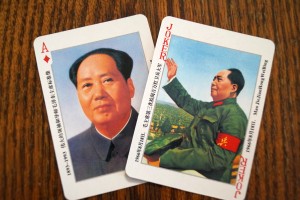 Dickshit he said: “To read too many books is harmful.” (p. 29, “The Oxford Handbook of the History of Communism”)

Trivia: Mao’s favorite hobby — reading. Mao was a “do what I say, not what I do” kind of guy.

Infamy: killed 40-70 million people. Numbers vary, but it was lots. 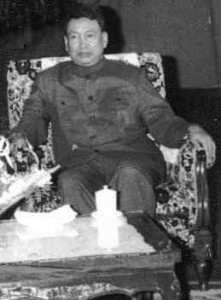 Dickshit he said: “He who protests is an enemy; he who opposes is a corpse.” (from the “Little Red Book: Sayings of Angkar”)

Trivia: Pol Pot was a geography teacher before he was the leader of the Khmer Rouge (1975-79) and the dictator of Cambodia. 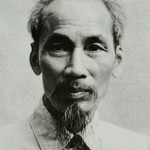 Dickshit he said: “You will kill 10 of our men, and we will kill 1 of yours, and in the end it will be you who tire of it.” I’m just guessing, but I think some people tired of that ratio.

Trivia: Ho Chi Minh (b. 1890, d. 1969) was a pastry chef and trained under famed French chef Auguste Escoffier before becoming the leader of northern Vietnam.

Infamy: Agricultural Reform Tribunals resulted in hundreds of thousands of poor farmers being tried (many falsely) as landlords, tortured, executed, displaced and starved to death. No cream puffs for you! Some applaud Ho Chi Minh, and many Vietnamese see him as a liberator from colonialism. I’ve kept him here for the cream puff line. Maybe Idi Amin should have gone here instead. 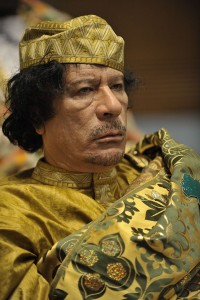 Dickshit he said: “Those who do not love me, do not deserve to live.” (quoted from the Independent.co.uk)

Trivia: Besides farting during interviews and owning a bulletproof tent, the Libyan revolutionary had his foreign secretary killed and kept the man in a freezer so he could take him out on whim and look at him.

Infamy: Gaddafi ordered the 1988 Lockerbie bombing (Pan Am Flight 103), and during his rule from 1969-2011, he funded international terrorism and civil wars, committed war crimes, human rights violations, used tanks and air strikes against his own civilians, tortured anyone he desired and was accused of horrendous sexual abuse. 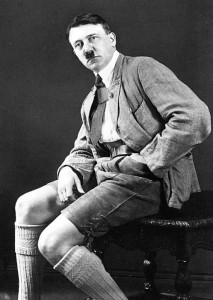 Dickshit he said: “Sooner will a camel pass through a needle’s eye than a great man be discovered by an election.” (p. 88, “Mein Kampf”)

Trivia: When Hitler’s press secretary disapproved of Hitler’s mustache, the Fuehrer replied, “Stop worrying about it. If it’s not in fashion now, it will be soon because I’m wearing one.” (from the book “1,227 Facts.”) This was before British spies plotted to make him girly by spiking his meals with estrogen (I’m not joking).

Infamy: Hitler’s regime was responsible for about 50 million deaths or more, if we include the world war he instigated — and we should. 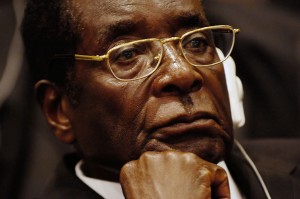 Dickshit he said: “I am still the Hitler of the time.” And Zimbabwe’s long-ruling dictator is proud of it. He also says he’s better than Jesus because Jesus died only once, and Mugabe claims to have died many times. He’s 91 now. Maybe the next time will be the last time.

Trivia: He was schooled at a Jesuit mission and was a teacher before becoming the dictator of Zimbabwe. He was knighted, but then the Queen of England took that back and un-knighted him. But that wasn’t why he said that the only white man that could be trusted was a dead white man. 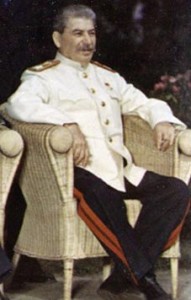 Dickshit he said: “Ideas are more powerful than guns. We would not let our enemies have guns, why should we let them have ideas?” (p. 121, “A Historical, Literary, and Political Anthology”)

Trivia: Stalin was a movie buff and enjoyed hosting movie marathons. He loved westerns, Charlie Chaplin and Tarzan, but he didn’t like smooching in movies.

Infamy: torture, imprisoning whom he pleased, and I.G. Dyadkin (author of “Unnatural Deaths in the U.S.S.R.: 1928-1954”) figured there were 34-49 million deaths that could be attributed to Stalin. 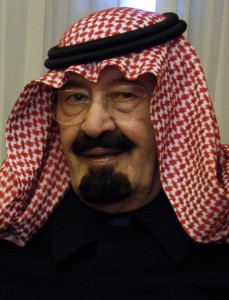 Dickshit he said: “As to women, the Islamic faith has given women rights that are equal to or more than the rights given them in the Old Testament and the Bible. There is no inherent discrimination against women …”  So I guess that’s why Saudi Arabia is the only country in the world where women aren’t allowed to drive cars — it’s an Old Testament thing, not inherent discrimination or anything like that.

Trivia: When King Abdullah died in 2015, he was replaced by his 79-year-old half-brother, Salman, who has symptoms of dementia. King Abdullah had at least 30 wives.

Infamy: funding Jihadis who became ISIS, Saudis are main funders of  terrorist groups such as al-Qaida and the Taliban, human rights abuses, beheadings, stonings, amputations, imprisoning and flogging rape victims, imprisoning and flogging a blogger for “insulting Islam,” death penalty for those who depart from the religious faith, arrests of peaceful rights activists, extreme repression and inequality of women, allows human trafficking and slavery of immigrant workers and much more. 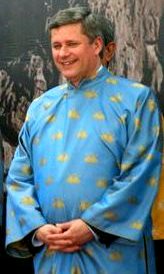 Canada’s leader, Stephen Harper — The Little Dictator Who Could — is on this list for his effort to become dictator. Recently Prime Minister Harper refused to participate in the national-televised leadership debate for the upcoming federal election, and it can be assumed this rejection to debate the other party leaders in this traditional event is so he can’t be caught spewing the dickshit that dictators say.

Dickshit he said: Regarding murdered and missing aboriginal women, “’Um it, it isn’t really high on our radar, to be honest …” The U.N., however, has Harper’s government on its radar and called for an inquiry and investigation.

Trivia: Award-winning investigative journalist Michael Harris, the author of the bestseller “Party of One,” says, “There is something very Stalinesque about Harper.” (read more in the National Observer’s article, “Is Harper the Worst Prime Minister in History?”) 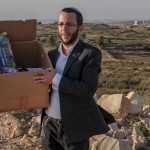 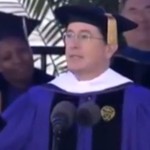