Looks like 2016 could be a golden year for movie musicals with highly anticipated versions of “Jersey Boys,” “Annie,” “Into the Woods” and “The Last 5 Years” all headed to the big screen, plus “Begin Again,” from the man who did “Once.”

This provides a perfect opportunity for me to dig back into the vaults and name what I consider to be the 10 best movie musicals of all time — until now. (By the way, I’m not including animated films. Just stuff with actual humans.)

“Cabaret” (1972) Liza Minnelli perfectly encapsulated divine decadence as the clueless but strangely sympathetic singer Sally Bowles, who’s conveniently losing herself in hedonistic Weimar madness as the Nazis rise to power. Joel Grey provides an unforgettably creepy and seductive The Emcee, and the whole thing was so expertly packaged by Bob Fosse that he beat Francis Ford Coppola’s “The Godfather” for Best Director! Wilkommen to the most adult musical ever filmed.

“Singin’ in the Rain” (1952) Hollywood shining a spotlight on itself is always a fascinating exercise, and in this case, it’s extra textured. Jean Hagen plays the shrill strumpet who’s having a hard time adjusting to talkies, but while Debbie Reynolds is the gal assigned to dub her, it was Hagen herself who did the voice! Has irony ever been this rich? Throw in great songs, deft staging and sharp satire, and this film is a great excuse to whip out your umbrella (ella…ella..) and enjoy.

“Funny Girl” (1968) As a record of Barbra Streisand’s astonishing performance, this film is a treasure, capturing the rising star’s chutzpah, humor and utter gorgeousness. Playing comic Fanny Brice, Babs turned it out, from the yearning “I’m the Greatest Star” to the hilarious “Sadie, Sadie” to the stunning, bold dramatics of “My Man.” A star was not only born, she exploded, shot up the sky,and never came down again. Fanny who?

“Chicago” (2002) An ahead-of-its-time Broadway show finally clicked with the ’90s revival, when everyone was more familiar with the horrors of celebrity justice and ready to embrace a mordant satire of that phenomenon. With its Fosse-esque edits, the movie made it work in a whole new medium, a healthy dose of razzle dazzle spicing up the tale of convicted killers Renee Zellweger and Catherine Zeta-Jones battling for the spotlight. Social commentary has rarely been this entertaining.

“Les Miserables” (2012) Yes, the whole thing goes on too long, but this is a potent adaptation with strong turns by Hugh Jackman and Anne Hathaway, gamely singing live and in closeup. What could have been schlocky and miserable ended up soaring like a skylark.

“The Rocky Horror Picture Show” (1975) No, technically, it’s not really a great piece of work, if you try to pick it apart. In fact, it’s based on a stage show that, on Broadway in the 1970s, seemed like one of the worst things I’d ever witnessed. But somewhere on the road to celluloid, “Rocky” developed more confidence and appeal (not to mention more people in makeup chanting along with every word). With its zippy melodies, affectionate spoofery and magnetic performance by Tim Curry as the sweet transvestite from outer space, this romp became an interactive love fest that helped kids to grow up and live their dreams. And it’s definitely Meat Loaf’s best film.

“West Side Story” (1961) An urban update of “Romeo and Juliet” populated with warring gangs didn’t even sound good on paper, but it worked on Broadway and the movie version became absolutely transcendent. Co-directors Robert Wise and Jerome Robbins made the piece about the pulse of the streets, the angst of the ankles, the dash of the elbows and the danger of hating. The dancing was brilliant, the romance was heartbreaking, and the message was hard to resist. “There’s a place for us …” indeed, and for me, it’s anywhere this masterpiece is being shown.

“Top Hat” (1935). A Best Musicals list without Fred and Ginger would be unthinkable — and probably should be illegal. Those two glided, spun and tapped together so perfectly they never should have spent a second apart. This film is a great showcase for their conjoined swirling, and it comes complete with all the requisite wisecracks, ambience and great supporting players to fill in the gaps between the numbers. With Fred and Ginger, hard work seemed extraordinarily effortless.

“The Wizard of Oz” (1939) This magical adventure retains its power to enchant, haunt and delight. It’s so much more than just a movie — it’s a communal experience that’s become one of our culture’s defining landmarks. The brilliantly cast actors, extraordinary sets and flawless songs make for an unforgettable trip down yellow bricks on the way to awareness and redemption, a trip that seems plucked from the recesses of your own imagination. Judy Garland rose to legendary status at an early age with this one, especially when warbling “Over The Rainbow” — the song that was almost cut from the film!

“Nashville” (1975) Robert Altman’s microcosm of 1970s America, as told through a swirl of stars, politicos and wannabes in the Tennessee music capital, is a searing, hilarious and magnificently edited piece of work full of life and observation. Ronee Blakley soars as crumbling country queen Barbara Jean, Karen Black rivets as icy diva Connie White and Barbara Harris is waiting in the wings, in case of an emergency. The result is one of the most important American films ever made and one of the best soundtracks, too. 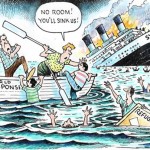