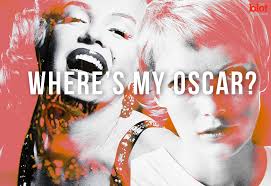 Let’s pay homage to the great Hollywood stars who not only never won a competitive Oscar, they weren’t even nominated. (Fortunately, some of them are still alive, so that can be rectified.) Here are the 10 most ignored of all time:

She was always feverishly studying acting to get better at it, not seeming to realize she already knew what she was doing. That’s OK; the world didn’t realize it either. Marilyn was widely accepted as a giggly sexpot, but there were real acting chops there, both dramatic and hilarious. “Bus Stop” and “Some Like It Hot” should have surely nabbed her nominations, but the Oscars said “Sorry, babe.” To their credit, the Golden Globes gave her nominations for both, and she won for the latter.
Also: Cameron Diaz, Rita Hayworth, Joan Bennett, Constance Bennett, Myrna Loy

One of the great leading men, whether in or out of the saddle, Joel was just too low-key to get much golden notice, I guess. But he shone in films like “Foreign Correspondent,” “Sullivan’s Travels,” “The Palm Beach Story” and “The More the Merrier.” George Stevens, Preston Sturges and Sam Peckinpah were among the auteurs who put him to work to good effect, but Oscar never noticed.
Also: Edward G. Robinson, Dennis Quaid, Kevin Bacon, Joseph Cotten, Dana Andrews, Peter Sarsgaard, Paul Dano

In the 1968 classic “Rosemary’s Baby,” Mia Farrow gives one of the screen’s perfect performances as a young married woman who’s getting paler and more horrified as she realizes the harrowing truths around her. It was an extraordinary year for Best Actress (Barbra Streisand and Katharine Hepburn tied for the win), but the fact that Mia wasn’t in the mix was a horror unto itself. She also did great work in Woody Allen films like “Hannah and Her Sisters” and “Alice,” but again, no cigar. What does it take, people?

The Canadian actor specializes in quirk, which may be why he doesn’t have shelves full of honors. But in “MASH,” “Klute” and swarms of other gems, his work is integral to the pulsing intelligence that makes those films tick. His son is pretty good, too.

Sardonic Steve has been nominated no fewer than five times in the Golden Globes’ Comedy/Musical categories. He won critics’ awards for “All of Me” and “Roxanne” and acclaim for “Pennies From Heaven.” But Oscar has turned his back on the guy (except for giving him an honorary award), not sure what to make of his existential physical comedy and diabolical wit. At least they let him host the Oscar telecast a couple of times — and he was hilarious. In fact, he was nominated for Emmys for it!
Also: Jim Carrey, John Goodman, Steve Buscemi

The vaudeville great went into movies and left an indelible stamp on the 1939 classic fantasy musical “The Wizard of Oz.” He brought hilarious vulnerability and nelly charm to the role, along with tons of heart and lots of noive. Can you imagine anyone else having approached the genius of that performance? Bert strangely wasn’t nominated, maybe because his performance seemed so surreally enchanted it would be cheapened by human competition. But he’ll always be the king of the forest to me.

One of our finest talents since she made a splash in 1998’s “The Horse Whisperer,” ScarJo has strangely stayed under the Oscar radar with everything from “Ghost World” to “Lost In Translation.” This past year, there was talk of her getting nominated for so ably supplying the voice of the computer system in “Her,” which would have been a truly groundbreaking occasion, but Oscar doesn’t have categories for voices alone, and it’s not about to start any. So she’ll just have to keep at it, and I’m sure she’ll end up with nominations (though “The Island 2” probably isn’t that good a bet).
Also: Kirsten Dunst

“Quirky” and brilliant” can’t begin to define the work of this actress, but she’s long been a treasured icon without a single nomination. Fortunately, others have surely noticed. She’s a Golden Globe nominee for “Mrs. Parker and the Vicious Circle,” and she’s garnered various honors for “Miami Blues,” “Last Exit to Brooklyn,” “Short Cuts,” “Single White Female,” “Margot at the Wedding,” “Dolores Claiborne,” “The Machinist” and “Georgia.” The woman never seems to pander, and let’s hope she sticks to that approach, marching to her own wonderful drum — a prize unto itself.

He exploded onto the screen in the 1960s and ’70s as a fiery presence with bulging eyes and a demonic grin. His performances in “If….”, “A Clockwork Orange,” “O Lucky Man!” and “Time After Time” were cinematic landmarks. But he usually excels at villains or very dark anti-heroes, and that’s not always the kind of thing that gets rewarded. Besides, Malcolm is so good he sometimes doesn’t even seem to be acting.
Also: Ewan McGregor, Dirk Bogarde