It’s not exactly clear why Ryan Gosling has an informal monopoly on being a heartthrob. Some women — and men — have decided he is the gold-standard of hot actors. Maybe it’s because “The Notebook” has joined ice cream, cats and the Rabbit in the single girl’s arsenal, but why does a guy who makes movies once every two years have an untouchable spot on the A-list?

Let’s face it, he started his career on “The Mickey Mouse Club” and “Young Hercules,” and since then, Ryan Gosling’s gone from playing a mumbling grifter in “Drive” to a mumbling ex-con in “The Place Beyond the Pines.” Sure, he’s got a decently cute face and an occasionally epicly cut-up body, but there are much hotter, talented actors out there.

They need their due, so here’s a collection of some of the sexiest Oscar-worthy and crush-worthy actors out there who could definitely unseat Mr. Hey Girl.

Michael Fassbender has it all. He has the intensity of Daniel Day-Lewis, the baby blues of Brad Pitt and an epic co-star in his Fass-member. It’s easy to write him off as a hung actor or that guy who plays Magneto in “X-Men,” but that would be cheating his amazing talent. He has versatility and has played everything from a Spartan soldier in “300” to a sex addict in “Shame” to an IRA volunteer in “Hunger.” He is even poised to play Macbeth in the film version of the Scottish play. Only time will tell if he will unseat Ryan Gosling, but Fassbender’s certainly endowed … with talent.

Jon Hamm has many gifts. He is amazing in both comedy and drama. His role of Don Draper on “Mad Men” was instrumental in making it a must-see series and elevating the AMC network. Like Fassbender, Hamm, too, has a certain natural gift in the form of a virile visible penis line that has found Internet stardom as the Hammaconda. A big penis is not what’s needed to unseat Gosling, although many would pay to see that show. But Hamm’s amazing acting talents only add to his sex appeal. He was bit of a no-name actor until he infused the role of a lifetime with the perfect blend of intelligence, dark brooding and heart. Sure, he can do quiet intensity, but he can also make you laugh. #Range

Yes, he has the eyes of a Gilmore Girl. Yes, he is famous for asking the most questions on “Inside the Actor’s Studio” before he was famous. Yes, he voices a raccoon in a major Marvel movie, but all that being said, Bradley Cooper is also an accomplished actor, so maybe those classes really do teach kids something about acting. He was part of the insanely successful “Hangover” franchise and also got a ton of Oscar buzz for his last few movies, “Silver Linings Playbook,” “American Hustle” and “American Sniper.” He also managed to completely overshadow Gosling in “The Place Beyond the Pines” and definitely has a lot more commercial success than Gosling, more accolades from the Academy and those dreamy baby blues.

Idris Elba oozes masculinity, even if his birth name is Idrissa. Sure, it sounds like a princess on “Game of Thrones,” but Elba’s so hard that it doesn’t even matter, which totally trumps a man named after a baby goose. Elba’s chiseled features, baritone voice and amazing talent give him super sex appeal. That sex appeal is more than enough for him to play the first African-American James Bond, plus he has both “The Wire” and “Luther” under his belt and is even a rapper and DJ. He manages to still be attractive and show his insane acting ability while dressed like a “Solid Gold” dancer in the “Thor” movies. So take that, Ryan!

Jared Leto will do whatever the fuck he wants. He can start a band, play a transgender woman in “Dallas Buyers Club” and win an Oscar. His face is so amazing that even when it’s covered in gnarly chin pubes, he still looks like an angel. Leto does dirty-hot and non-traditional roles way better than Aryan poster-child Gosling. Plus, when Gosling was super dorky in “Young Hercules,” Leto was stealing hearts as Jordan Catalano on “My So-Called Life.” He is not only an amazing actor and stunning sex symbol — he’s also a pop-culture reference.

People may argue that Ryan Gosling is understated sexy, but John Cho trumps that. He also has the dynamic duo of amazing comedic timing and great dramatic chops. He’s proven he’s more than just Harold of “Harold & Kumar” fame. He’s been on quite a few television series and is due for another starring role in a movie, but he’s doing alright as Sulu in the new “Star Trek” franchise. Cho may not seem like the type that will push you up against the wall in a dark alley, but he does seem like the type who will bang your brains out and then help you raise well-mannered children. That’s better in the long run.

Charlie Hunnam does Ryan Gosling better than Ryan Gosling. He can do clean-cut or grungy and still look hot. His role on “Sons of Anarchy” has made most people reconsider the sex appeal of Hell’s Angels. He also really respects his craft. After all, he did turn down “Fifty Shades of Grey” — that’s pretty telling. It may not seem that way now, but remember how much of a hot ticket Robert Pattinson was at the height of the “Twilight” craze? Right now, this second, do you even care where he is? Exactly.

Yes his name is a mouthful, but Benedict Cumberbatch has something Ryan Gosling will never have: The love of the land across the pond. Cumberbatch managed to reinvent public-domain darling Sherlock Holmes into an international must-see hit series. He was nominated for an Oscar for “The Imitation Game,” but also found some spots in “The Hobbit” and “Star Trek” franchises. So he may vaguely resemble a sea otter in a meme, but he’s also super bankable, tall and has a voice so deep it will tickle your insides. Forget desolating Smaug, he can desolate Mr. Gosling.

Tom Hardy is dirty-hot. He looks like he could beat the shit out of you, but he’s so hot you question if you’d mind. He also doesn’t shy from playing wild characters from boxers and thugs to Bane. He did a lot with “The Dark Knight” character who wore a weird mask and talked like a 1920s newsreel narrator. He’s grizzly, but also has amazing talent. After all, Hardy’s credits are majorly impressive … except for that Reese Witherspoon rom-com “This Means War.”

Nicholas Hoult did the child-actor thing way more successfully than Gosling. He had an amazing performance in “About a Boy” and then grew up doing the occasional role here and there until he starred on the edgy, cult-classic series “Skins.” He went on to play a gay muse to Colin Firth in “A Single Man,” Hank McCoy in the “X-Men” franchise and, most importantly, “X-Men” co-star Jennifer Lawrence’s boyfriend for a few years. Hoult has an understated attractiveness that is combined with a really subtle but poignant acting style. 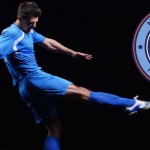